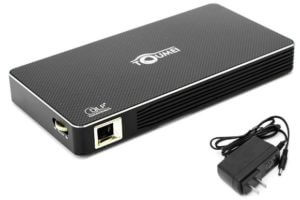 If you are looking for optimal entertainment and quality display portable projector at low cost, luck maybe on your side as TOUMEI C800 Portable WiFi Projector covers almost all of those great feature that most projectors don’t have and highly affordable. This model has some great advantages compared to other projectors by far. Some of the key feature discussed in our TOUMEI C800 review;

This compact WiFi Projector plays as a complete home entertainment system, wherever you go and anytime you want. The device enhances your experience whether you’re playing a game, working on office documents, watching movies or TV shows by casting them on a big screen. The model also known as SCASTOE TM-C800.

The device is powered with Quad-core ARM Cortex-7 CPU and Octa-core GPU, 1GB DDR3 RAM and 8GB high speed Flash Memory for lag-free performance and it runs on Android 4.4 OS.

One of the great features is the fact that it has an integrated dual wireless module, which supports multiple device connectivity. Not many portable projectors can boast the fact of having dual WiFi built in them. You can easily pair wireless enabled speaker, keyboard, mouse, gaming consoles, computer or laptop.

Other than just streaming movies and TV shows, the projector also supports reading and editing of various documents such as word, excel, PDFs and even power point documents.

The portable projector support full-HD 1080P resolution videos with 854×480 native resolution display or 1080×1920 maximum resolution. Its 100 Lumens brightness and 2000:1 contrast ratio will give a decent picture quality on big screen. The Portable WIFI Projector also happens to have a 4100mAh lithium battery that will last about 2.5 hours on a single charge.

The TOUMEI C800 sports Osram RGB LED light source that is expected to last for 30K hours or 10 years. Most of the other low-cost models do not have a long lamp life compared to the TOUMEI C800 Portable WIFI Projector. The device uses a High Performance Optical Engine technology that will prolongs and extends the lamp life.

Easy to Control and Operate:

It has easy to control functions with the full-functional remote (comes with the product). On top of this, it is also compatible with smartphone or 2.4G wireless mouse controls. 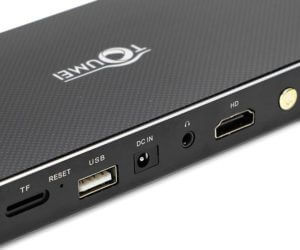 The projector is equipped with a range of expansion interfaces such as game controllers, wireless keyboard, wireless mouse, speakers, laptops or computers, VGA game consoles and much more. The device sports USB input, TF memory card slot and HDMI. User can also mirror smartphone screens thru Miracast and Airplay.

TOUMEI C800 projector is one of the game changers in the market compared to most of the other projectors. With all of its built-in functions makes it truly portable and worth having.